A tool to estimate the gender gap in Wikidata and Wikipedia

A new version of this tool was released and this article is out of date. You can find detailed information about the new version in this blog post: Denelezh 2.0, a transitional version.

Last November, for the 10th anniversary of Wiki Brest, Florence Devouard gave a talk about wikis (« Les wikis et vous ? », “Wikis and you”). She of course mentioned the gender gap in Wikipedia, that occurs on many levels: biographies in Wikipedia are mainly about men, Wikipedia contributors are mainly men (the audience that day could not deny that with the row of Wikimedians composed exclusively of men), etc.

One difficulty is to measure those gaps and how they differ from the gender gap in real world. As I contribute about French politicians on Wikidata, I had one example in mind where the gap in Wikipedia biographies was only a reflect of the real world: in French National Assembly, there are only 27 % of women and the gap has been slowly decreasing for only 20 years. But I had no clue for other professions or countries.

Wikidata is the central repository of Wikimedia projects for structured data. As of March 2017, it holds data about 25 million concepts (called items), including more than 3 million notable people. An idea was to use this huge content to have more statistics about gender gap. Three weeks ago, I started to work on a reporting tool to automatically compute data from Wikidata and display statistics about the gender gap: Gender Gap in Wikidata. The tool is available since March 8, 2017.

The tool provides indicators about:

For each set, it displays data for three subsets: women, men and others. Others subset gathers humans whose gender is known but neither female nor male.

Each set can be aggregated by year of birth, country of citizenship and occupation, with all possible combinations.

Aggregated data can be downloaded as a CSV file from the About page.

An important point is that not all humans in Wikidata are used to produce these statistics. To sum up, only humans with gender, year of birth and country of citizenship are used. This is explained in the following section.

Each week, Wikidata provides a full copy of its database (called dump). In the following sections, figures were made using the dump of March 6th 2017.

In a dump, data is structured in statements. A statement is a triplet item–property–value. An item can have several values for a given property. For example, a person can have more than one occupation. Another example is when sources disagree about an information.

Rule 0: A human is an item with a single value of property instance of, equal to human.

The tool aggregates humans by gender, in 3 subsets (females, males, and others). Each value which differs from female and male is considered as other.

Rule 1: Each human has a single value of property gender.

This has two effects:

Property values are not checked, meaning that some may be false. In the dump, gender values are:

There are only 7 obvious errors:

Other errors can still exist (for example, a man with female for its gender).

The tool aggregates humans by year of birth.

Rule 2a: Each human has a single value for its year of birth.

This is done to avoid working on nearly-empty sets. It filters 60,730 people.

Rule 2c: Year of birth can not be after the year of the dump.

This is done to remove wrong data (we don’t have time travel yet). It filters 1 person.

The tool assumes that all dates are represented in Gregorian and Julian calendars, without normalizing them.

The tool aggregates humans by country of citizenship.

Rule 3a: Each human has a single value for property country of citizenship.

Rule 3b: Humans from countries with less than 100 people are removed.

This rules is applied after all the other rules. It removes only 4,179 humans, including a lot of garbage (like values French instead of France).

Only humans meeting all preceding rules are kept. The goal is to remove people with few data (and therefore likely of poor quality). In the table below, you can see cardinalities of humans sets respecting each group of rules:

The tool aggregates humans by occupation. All occupations with preferred and normal ranks are kept. A same person can therefore have 0 to several occupations.

Rules 4: Occupations with less than 100 people are removed.

The following is not an analysis of the data provided by the tool, but some elements that you should take into account before using it. 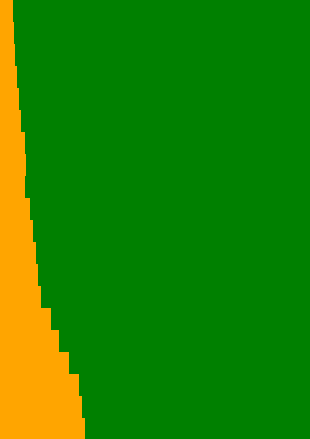 You can’t directly compare figures from two countries as they don’t have the same history. For example, Russian Empire existed from 1721 to 1917, Soviet Union from 1922 to 1991 and Russia since 1990. As we saw before, gender gap is reducing over time after 1850, so you can’t directly compare those countries. You can see below the number of people born by decade, for those three countries of citizenship, in the selected set: 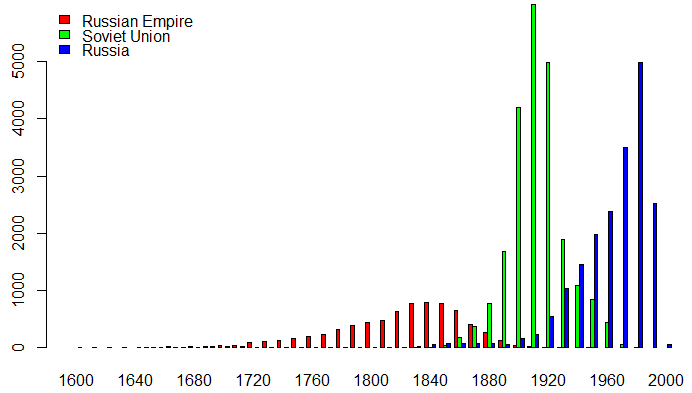 The tool does not take into account inheritance offered by property subclass of. For example, someone with screenwriter occupation will not appear in the subset of writer if this second occupation is not explicitly stated.

I made a quick test in order to use position held property in the same way as occupation. It seemed less interesting as it is essentially positions as member of parliaments in North-American and European countries. A dedicated work for this subject should be done (I started for France).

As you can see, there are a lot of tracks to improve or analyze data on gender gap in Wikidata and Wikipedia. If you don’t know where to start, a simple way to improve data about humans in Wikidata is to play Wikidata games, with dedicated games for each property: Person, Gender, Date (of birth), Country of citizenship, and Occupation.

The tool is a small project, that you can divide in three parts:

Source code is available on GitHub, under AGPLv3 license.